G-Dragon "One of a Kind " song / video review/impressions 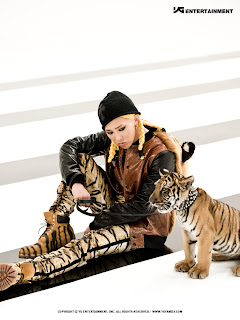 The MV of “One of a Kind “ is finally out after all those count downs .. .
I am not going to write an actual review but more like first impressions for the video .

First to say something about the song – yes , it is freaking addictive and I don’t even know why ! This “helloooo “ is echoing in my head since the preview came out ! GD is back to hip-hop ! But I am sure this is not the only music style we gonna come across in his album.

As I said, the song has a very “cool” feel to it, the beat is great and I like it … but I still kind of expected MORE . But this is only the “intro” to the album so "the more" is yet  to come , so I am not about to complain .Dropping all expectation out and open my mind to whatever GD has to show us , are current intentions .

Now , back to “One of a Kind “ . It seems to me that this is some sort of “continuation” from “Knock out “ and from GD&TOP in general  . I say that because the themes in the song  ( One of a kind ) and the style of the video ( not the actual music ) , remains me of Knock out . But it is taken one step further and it is done purely GD’s way . What I mean is that he is talking about things that he has already mentioned before , such as his fame and money and people’s point of view of him and so on. Still many things happened since GD&TOP so he has more to add and more material to “play” with .
I really hope he will be adding more to it and that he has more to show and more to talk to us about. He is GD , so I am sure he does . 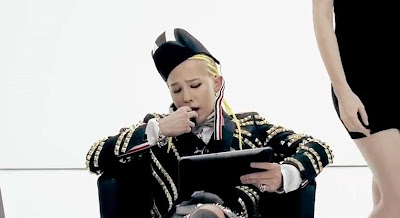 Now lets talk about the video .
As I said it kind of remained me of Knock out at first ,  but still the OFK's MV has its own atmosphere and it gets pretty different from Knock out . It deserves its own recognition .
As almost every GD’s video , this as well has its dose of “symbolism” , therefore it is interesting to look at the little things …just don’t over do it , people ! There is also some hints of self-irony that are enjoyable ;)

As for the hairstyles … yes the blond is extreme , too fake looking for my liking , but it fits the video style , so I am ok with it .  GD changes his hairstyles as often as he changes his clothes , so don’t be too worried . Everything is part of his concept and for sure what today you say is horrible , you will miss tomorrow when he changes it . ( as his Rapunzel’s hair ) .
About the kids dancing around in  hip hop songs …. Why they are there … I guess cause they are cute and cool ….

But lets start from the beginning. I will mention few things .

- The tiger that turned out to be GD’s jacket ! Well ,that was hilarious just for the sake of GD’s collection of crazy jackets ! In BadBoy , some people were saying that he is wearing some “dead animal “ on his jacket … well no ! But he is wearing it now ! ( ok , I hope that tiger is not real , ok ! )
and the little tiger ! I love it ! I love tigers :D !
And GD with those Viking's braids ! lol - remains me of an old picture with BIGBANG


- The police/emergency sounds and GD like a prisoner is really symbolic . What it means? Well , is pretty obvious – GD is always accused of some “big crimes “ as if he is an actual criminal .
About some detail – the stripes on his clothes are different from the stripes on the clothes of the others . Maybe it is just to distinguish him better. I check that prisoner clothes exist in both version so it doesn’t really matter I guess . 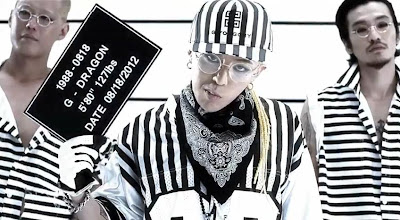 - The background with the notes is so cool ! Also it keeps repeating the theme of “lines” and “black and white” that appears few more times like in the “criminal” scene ,  also with the female dancers ( the ground ) or the choice of socks in most of the scenes .
Is music his crime ? Or it is the everlasting background to all that happens to him .


- Now about the Barbie ! It makes me laugh a lot ! ( it remind me  this video of  Jedward http://www.youtube.com/watch?v=uOoF7I3Piwk )
Are really all the women around GD some Barbie bitches who slap him ! haha ! Hope not ;) Or just some idealistic , sophisticated beauties that like to show some character ! haha who knows … 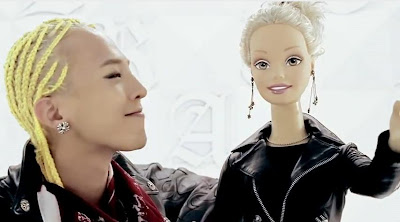 - Another key scene is when GDragon  is on the boxing ring and he is “fighting “ . GD is probably fighting the haters or society or life or all those combine . Note two things – 1st his face is all covered with “gold” fake things . I don’t know if he has some kind of self irony or he just again “shows off” his richness or he demonstrates that his money are his fake protection .... but they fail to protect him after all ( he gots beaten up ) .  2nd - note that he is wearing a t-shirt with written “original “ on it . I guess being original and “one of a kind “ means you need to fight for your ideas cause you will be attack no matter what . Poor GD got all beaten up ! 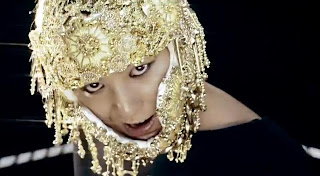 - Now come one of my favorite scenes – we see GD’s dark image , seating on messy table , changing into sunny and elegant and nice GD on a perfect table .

I read on tumblr that a lot of people’s opinion about this is that haters look at GD with wrong eyes so they see him like some heart eating monster while he is totally normal and nice ...
At this point I stopped reading  and decided to write my own first opinion unaware of what other people might thing . I might change my own mind after watching this video a few more times but I want to catch my first impressions without being influenced by others .

So about the table scene . I guess what I saw on tumblr makes sense but the first time I watch it I got it completely the other way around. As if those glasses are for “night sight “ like to see into the dark and then you see that GD’s life is actually messy and he probably feels totally not OK ( beaten up and defeated after the match - he really looks like this is a continuation of the boxing scene by the way GD is "hit back " and falls on the chair ) , but on the surface he will always look all perfect and he will always smile . And this “perfect “ image is what gets photographed by the others . ( you can see the camera photographing him at the end of the scene ) .
I think this scene is very suggestive so it is left open to people’s different interpretations . There is never only one truth about things . 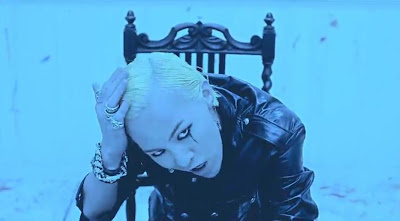 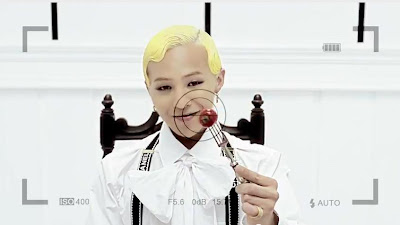 - I also liked the dragon on those dancers clothes! As well as the small dancing bear ! GD never got the show us the fox , though … ( check lyrics translation to know what I refer to ) … Is GD more like a bear ? He also wears the bear ears ( that also remind me of Mickey Mouse ! haha , Taeyang it is your fault ! ) 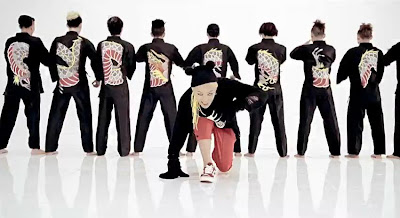 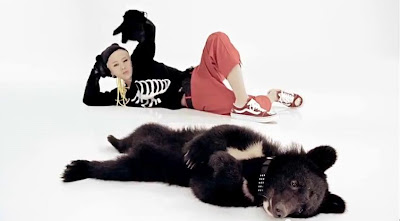 - Later we have GD all busy , taking calls from here and there and being all like “this clothes yes , this no “ … this is typical scene to show superstar’s busy , glamorous life ….or the way people see his life

- Then the tennis ! I love this scene ! I think GD looks really young and free and himself here … well , remember that tennis is one of the games of the rich … Chanel racket ? Damn , boy , you really are into brands , ain’t you ! In any case is cool how he breaks all the glass boxes where he older stage costumes are – the one from Heartbreaker and Knock out and so on . I guess he is not going to lay on old fame and he will show us something totally new ? Lets see ! 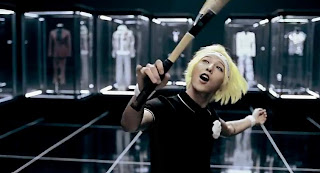 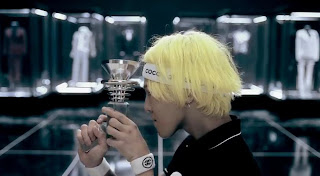 -  Now we got “shot “ and here comes Taeyang with his new hairstyle …one that I don’t really know what I think about … The skater friends are back together ;) The "G" that is used for skateboarding is really cool ! :) ( sorry I use "cool " a lot ) 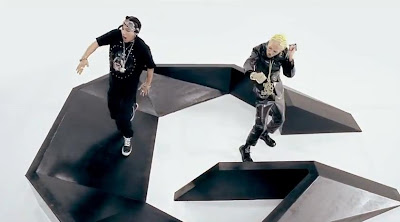 Now if we go back a little  we can make a whole story out of those my impressions – such as : GD “labels” himself as one of a kind person. (  The way “one of a kind” t-shirts are made – very basic and shaped as a label , suggests that . ) Actually he is not alone , there are a group of people , claiming to be unique . ( I cannot place the kids in this fictional story … but they probably have some secret meaning ! lol , I am joking ) .
So this “gang” of  “one of a kind people “ got arrested for going against something . ( as the lyrics suggest “I’m number one trouble maker in the celebrity world …. because no matter what I do, chaos ensues because i make trend, because i change everything )
Probably arrested for his music ( I want to know what those numbers on the music sheet mean! ) or accused for something ( for being unique , I guess ) in the music world , GD is having some very sexy police girls there to guard him! … Anyway , later he is “set free “ , and is messing around with some Barbie who broke his heart . ( haha ) sorry about that last comment ! just stupid joke .
So here is GD again out there to fight the world on the boxing ring but he gets knocked out and he is totally “not in the mood “ with his heart on a plate ,  but smiling instead to the cameras . He is now going to destroy all that previous images and to show us something more …. But in the end of the day he is just that boy , who likes to skate around and have fun with his friend Taeyang ….  … Really , I am overdoing it ! So enough !!! 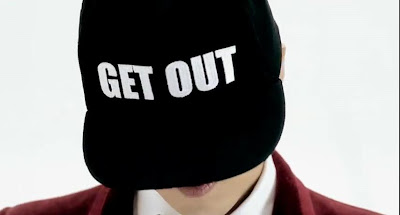 Now , I want that album out already !

Yes , yes , I know I didn't mentioned a lot of things but ...  that is quite long post already and I do not wish to over analyze the video any more . ! So just go watch and enjoy the video !

PS I guess the paper money flower was for this video but maybe they cutted out after it cause so much confusion.... or we are yet to see it ... or is was in the video and I didn't notice it ! I am going to watch it agian! ( I found an excuse ;) ) 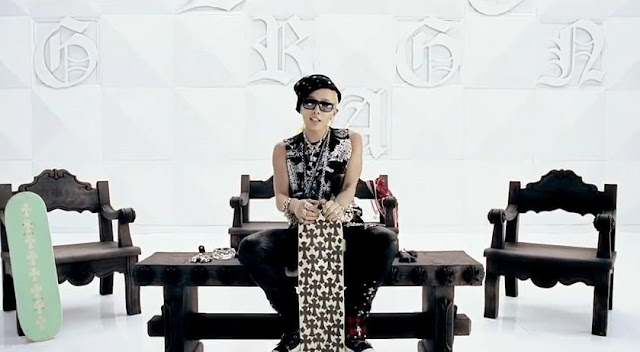