BigBang members have been spotted wearing Chrome Hearts items a lot of times. This is also one of Taeyang’s favorite brands.  Since BB mentioned the brand again in a resent interview , I decided to let you know more about it! 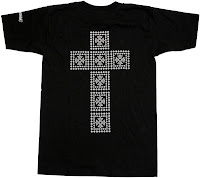 Chrome Hearts is a luxury brand founded by Richard Stark that was launched in 1988 with their first personal store opened in New York in 1995.

Chrome Hearts made a name for themselves with their jewelry line, but nowadays many different kinds of lifestyle merchandise is also available ( in addition to rings , earrings and bracelets , Chrome Hearts now offers also flacks , lighters , leather belts , purses and more )

Chrome Hearts items’ trademark is usually the use of ornaments as fleur-de-lys, daggers or floral cross design.


Chrome Hearts Jewelry tends to be highly detailed, with a somehow gothic look to it. This Jewelry is also known to be manufactured with particular silver, specially treated to give a unique classic silver-black look to the surface. The cost of making the items as well as the big among of silver used to create the heavy designs, rises the price of Chrome Hearts Jewelry to hundreds or even thousands of dollars.

Let’s say it in a few words – it is an expensive luxury item, that music and film stars love! It is especially popular with rock stars or with celebrates who want to hint a “bad boy” look. Thanks to having their jewelry worn by many celebrities in both Asia and the West, Chrome Heart is gaining more and more popularity.

There are Chrome Hearts boutiques in New York, Los Angeles, Malibu, Las Vegas, Honolulu, Tokyo, Osaka, Hong Kong, Taipei, Seoul as well as Paris and London. ( you can see on this page http://www.chromehearts.com/  that most of Chrome Hearts shores are actually in Japan ) .

Do you like Chrome Hearts style ? Do you think some of their items might fit your won style or not ?

Email ThisBlogThis!Share to TwitterShare to FacebookShare to Pinterest
Labels: fashion and style